The Moroz Family – From the Soviet Union to the Liberal Gulag 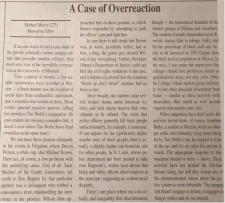 A case of overreaction

As a 46 year old Liberal, I take offense at half of that, but I would not wish to stop anyone from saying it.

Unfortunately, I feel like an endangered species – the Liberal who embraces dissent and debate. As a Liberal, I have always valued education – as I look at places of education as places where we manufacture Liberals — by educating people. To me, wide open and robust debate and the revelation of knowledge will inevitably drive one to the Liberal view – but to get there, we must tolerate views with which we disagree.

I realize that this may not always be the case. But, I have sufficient confidence in my views that I enjoy seeing them challenged, confronted, and either torn down, reconstructed, or galvanized in the fire of intellectually rigorous discussion. If they can not survive this crucible, then they merit their place on the trash heap.

Unfortunately, my view of places of learning as the font from which free speech flows is showing its rust and stretch marks. Now that people (I guess) who are of my like views are largely in charge of education, the prevailing view is to end the debate. Declare victory. The discussion is closed.

A burning example comes to us from Philadelphia, within a stone’s throw of Independence Hall and the Liberty Bell. There, Michael Moroz is the son of Soviet immigrants. I interviewed Michael’s mother, who told me that they left there because they wanted their son to be able to grow up with freedom. Freedom to speak his mind without concern that saying the wrong thing would mean that the state would come down on him. She believed our marketing materials for “The American Way.”

She now believes that America did not come as advertised.

Michael is a high school student at Central High School in Philadelphia, and is also the managing editor of his high school newspaper, “The Centralizer.” He recently wrote an article called “A Case of Overreaction,” which criticized the Black Lives Matter movement.

I didn’t particularly agree with the article, but I found it to be well written and well presented. It was originally printed alongside an article that supported the BLM movement. Two opposing points of view, presented to the reader – who is left to decide which is more persuasive. This was the marketplace of ideas in action.

Michael’s fellow students took to social media to try and convict him, all in one movement, of his treasonous thoughtcrimes. They posted that someone ought to shoot him. There were calls that he must be “dealt with.” One wrote that “[he thinks] his white privilege will keep him from getting ‘popped.’” Even an alumnus proudly wrote, “Black students at Central will handle their business.”

Michael’s fellow editors then censored his article, “If an article comes across as insensitive, and the Central community would rather have it taken down because of this, then the article will be taken down.” Remember, only Moroz’s article was censored for being “insensitive.” Meanwhile, the counterpoint – the “politically correct” perspective was not. Enter the state — administrators backed the decision. (source)

One would expect that the principal would clamp down on threats of violence against a student in his care. After all, if we condone censorship in the name of “sensitivity”, then certainly we would do the same when calling for the boy’s safety to be compromised. One would perhaps expect the Principal to even call for a “safe space” for a minority view like Michael’s to be able to flourish – even if only to be rejected.

Instead, the principal seems to have sided with the censors, although three of the students issuing specific threats were, ultimately, disciplined. (source) The student paper’s faculty advisor promoted someone else to serve alongside Michael as managing editor and then stripped him of the right to access the paper’s accounts. Moroz claims his faculty advisor admitted to diminishing his authority because the paper was “receiving email requests from media.”

Moroz’ parents left the Soviet Union because they did not want to have their son grow up in a country that suppressed and intimidated disfavored political views. They moved to America – Philadelphia no less – so that they could live in a country where dissent and diversity of thought would be welcomed.

Moroz got a little trip into the mentality that his parents sought to escape. He had the wrong politics, and thus he was subject to harassment, intimidation, and a different set of rules than if he would just be a good boy and get in line with the favored viewpoint.

Of course, in Soviet Russia, hyperbole rhetoricals you. And here, the KGB did not kick down his door and whisk Michael off to the Lubyanka building. Nobody froze to death in a gulag. So, I’m not in a state of panic for him. But, this is how it begins. We don’t wake up one day, and overnight, you’re not allowed to have a dissenting viewpoint.

No, first they come for the conservative students, and maybe you don’t speak up because you’re not a conservative student… Michael was subjected to a hail of abuse and genuine threats, with those who should have protected him complicit, even if they were not active participants. (Although, I would say that every adult should have stood up to protect him).

I wouldn’t be half as outraged if Michael simply suffered social ostracism for not conforming to his peers’ prevailing views. Sometimes, thinking a little different than everyone else means you have to take a little shit. But, that’s when the adults are supposed to step in and act like referees – keeping the game fair (at least as long as Roger Goodell isn’t involved).

But, when the administration condones it, even tacitly, something is damned wrong. When the rules for one side of the debate permit censorship in the name of “sensitivity,” but the other side of the debate is licensed to speak, something is terribly wrong. When a student gets death threats for an article in a student newspaper, and every single teacher in that motherfucking school was not standing next to him, supporting him, then the place should be razed to the fucking ground, and every teacher in the place marched out into the fields to grow rice until they drop from exhaustion. Fuck them.

Imagine if Michael had written a piece supporting gay marriage, transgender rights, racial equality, or some other happy liberal view, and he found himself attacked and threatened by bigots of the opposite view. Would the result have been the same? I think not.

The school should have protected him the same as if he were supporting gay marriage and he received threats for that view. Give him the same shield as if he were promoting racial equality, and racists threatened him. There is no hope for any of us if we teach that 17 year old that if he does not get in line with the politically approved doctrine, that we adults condone death threats and violent harassment.

But that didn’t happen.

Because that’s not the way things are handled anymore. We have “safe spaces.” But not for conservatives. We have a culture where victimhood is currency, and the crybaby is king. We have an intellectual environment where if you dissent from Liberal orthodoxy, you are a sexist, a racist, you’re mansplaining, whitesplaining, or simply worthy of being killed… or at least threatened. After all, you’re wrong, and “they” know it. What use is there for debate or dissent? Let the letter writing campaign begin, because the victims will now be the victors, and to the victors go the spoils.

And funny enough, those who would threaten Michael or tacitly condone the threats are also the first who would screech for remedial racism in the name of “diversity.” Meanwhile, they want anything but “diversity.” There will be one way of thinking. There will be purity of philosophy. You must follow the approved orthodoxy or things can go very badly for you.

Mr. Moroz, I promise you, not all of us adhere to this view. We didn’t sell your parents a bill of goods. Its just that somewhere along the way, after they got here, we changed and fucked it all up. Some of us want to change it back, and I think there is still time.

This entry was posted on Tuesday, February 9th, 2016 at 5:48 pm and is filed under misc. You can follow any responses to this entry through the RSS 2.0 feed. Both comments and pings are currently closed.