Why we need “White History Month” Too 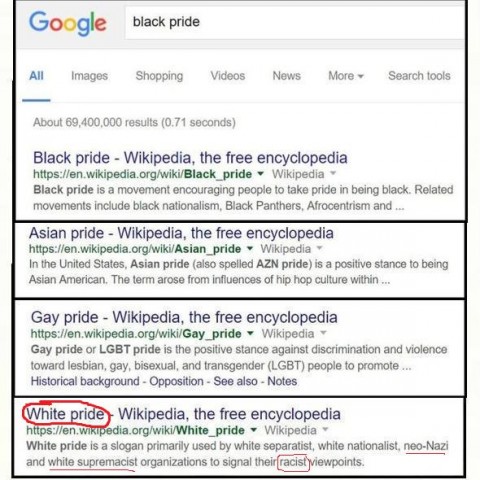 We do not need “White History Month.”

“White Pride” is not the same as “Black Pride.”

I’m really sick of hearing this garbage, as we hear every February. And remember, I’m the guy who keeps screaming that political correctness and identity politics are out of control. So hopefully that keeps at least one person’s attention here.

Let me explain this to you, if you’re genuinely confused. If you’re just a dick or a white supremacist, you can just jump down to the comments and call me names now. I’m neither getting through to you, nor trying.

Race is a political construct. You know who invented “blackness?” Slave traders. There was no concept of “Black” as an identity before slavery. But, in a world that wanted slaves, but the concept of slavery being completely fucked up, there had to be a way to justify it. It didn’t take genius to say, “lets just enslave people who look really different from us.”

“African American” is an “ethnicity” created by the institution of slavery, and then perpetrated by Jim Crow.

Let me explain this to you in Italian terms:

Before there was an Italian nation, Prince Metternich of Austria made remarked that Italy was just “a geographical expression”. When he said that in 1847, there was no “Italian” identity.  “We” identified with our town or province.  “We” were not a unified people, “we” did not speak the same language.  “Italians” had not all been under the same flag since ancient Rome.

A more aspirational quote came from Massimo d’Azeglio.  After unification in 1861, he said “we have made Italy; now we must make Italians.”  At that time, only 2-3% of the population spoke “Italian,” and even the King and Cavour barely spoke it – speaking regional languages instead.

Although Metternich intended his comment to be dismissive of Italian unity, he was in large part correct.  Someone from Palermo had little in common with someone from Torino. There was no common language, and “Italian” was no more an ethnicity than “Balkan.”  To make “Italians,” it was necessary to forge a unified identity.

Strangely enough, this happened in Italian America even before it really happened in Italy.  Immigrants, arriving here from “the old country” were all looked at as “Italians” by the existing Americans.  In my home town, the “Italian” immigrants (mostly from Sicily) referred to anyone who was not like us as ‘medegani – Americans.  This artificial divide helped forge an “Italian” identity in America – in some ways making d’Azeglio’s dream a reality in Little Italy before it was a reality in Italy itself.

Similarly, but at the same time, really differently, Africans wound up in America from a mishmash of different places, traditions, languages, and ethnic groups. But, unlike the Italians, who didn’t have their languages beaten out of them, didn’t have their families forcibly broken up, and didn’t have the choice to go back where they came from taken from them, the “Blacks” wound up mixing together — forming a “Black” ethnicity.

Now I really chuckle when I hear other Italian Americans say “yeah, well the Italians got treated like shit too.” Fine, yes, they lynched some Italians in New Orleans, and Sacco and Vanzetti were innocent, and went to the chair because they were Italians. If you think that puts Italians at the same level of getting-fucked-over and being the subject of generations of disrespect as the Blacks, you’re out of your lasagna-slinging mind. At least “we” can go back to our ancestral town, if we’re one of the Italians who bother to give a shit where our grandparents came from (and fucking shame on you if you’re Italian and you don’t know).

Meanwhile, the furthest back most African American families are going to trace there heritage is to some bill of sale in Savannah.

Point being, this is a “new” ethnicity, and even once Black America gained its freedom, at about the same time that Italy became a thing, it then found itself under the thumb of 100 years of Jim Crow and capitalism-cum-racism. So, while (for example) the Jews suffered under multiple attempts at genocide, they could reach back to 3,000 years of history and tradition to keep their shit together. Meanwhile, “Black History,” almost didn’t exist.

African Americans are descendants of the most fucked over group of people that history has ever recorded. Because I can’t think of any other group of people who were so thoroughly detached from their ancestry, then kept as chattel, and molded into an ethnicity by people who didn’t treat them as human beings.

And meanwhile, your Czech-descended, or Irish-descended ass is worried about whether you need a little bit of “White Pride?”

There is no “White” — ok? “White” is actually a collection of ethnicities, all of which have their own history, their own languages, and their own trail and identity they can pick up. The most downtrodden Pole is still not wondering if anyone knows that Poland gave anything to civilization. We’ve all heard of Copernicus, we all know about Galileo, Nikolai Tesla is practically a folk hero. Anyone “White” who thinks they need “White Pride” or “White History Month” is forgetting that they’re something other than “White.”

And, if you only identify as “White” and not the underlying whatever-you-came-from, then shame on you, or your parents, or grandparents, or whoever decided to let go of the thread of your identity. Nobody cut that on you. Nobody forcibly severed you from that connection. Nobody created your identity. You either still have it, or you gave it up.

You’re not oppressed this month. You may have had a shitty life. Your parents may have too. You may even come from five generations of imbeciles and losers, but that is hardly the same as the black experience. Yes, at some point, Black people have to take responsibility for themselves and stop complaining that white people caused all their problems.

That’s not what Black History Month is about. Black History Month is about recognizing that there is this unique group of people here, who happen to be 13% of the population. They happen to have done at least 13% of the work in bringing America to where it is today. They also happen to have brought much more to the table than great basketball players and collard greens. The fact that some of us don’t know that is something worth dealing with and fixing. Further, its not such a bad thing if the black community has a month to be a little bit more proud, since on average, most months in black history have been really really shitty months.

Go enjoy it, show a little respect, and if you’re not careful, you might learn something.

This entry was posted on Tuesday, February 9th, 2016 at 5:44 pm and is filed under misc. You can follow any responses to this entry through the RSS 2.0 feed. Both comments and pings are currently closed.