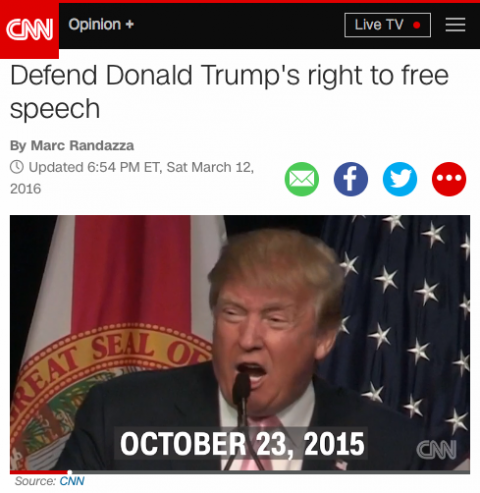 I don’t write the headlines

I don’t get to write my own headlines, ok?

And the bad people will always have more of a stomach for it, so in the war of attrition, they will win. They’ll always be willing to bash you over the head with a truncheon for less of a reason, with more willingness to keep going long after your head looks like cherry pudding. They’ll always go further on a macro level too, they’re the bad guys because they’re sociopaths.

No matter how right you are… if violence ensues and you win? You’re probably one of the bad people. I don’t care if you’re protesting against the KKK or NAMBLA or the Black Panthers or ISIS or Nickleback fans.

That’s kinda the point of my column:

Donald Trump finally learning about the meaning of free speech?

Other candidates might be bad for free speech once elected. But Trump is the only candidate to actually campaign to reduce our First Amendment rights. This is the guy who said, “There used to be consequences to protesting. There are none anymore. These people are so bad for our country, you have no idea, folks.”

On Friday, he canceled a rally in Chicago, citing security concerns. Eyewitnesses reported that there were thousands of protesters outside, and hundreds demonstrating “in unison inside.”

Even after it was canceled, there were reports of several outbreaks of violence in the streets after the speech and protesters celebrating by chanting, “We stopped Trump!”

And now, while everyone is trying to play the blame game, Trump ironically asks, “What happened to freedom of speech?”

This entry was posted on Monday, March 21st, 2016 at 12:29 pm and is filed under misc. You can follow any responses to this entry through the RSS 2.0 feed. Both comments and pings are currently closed.