A fabulous Roman candle exploding like a spider across the stars 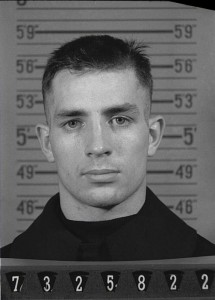 On March 12th, 1922, the universe lit the fuse on the roman candle of the existence of one Jean-Louis Lebris de Kérouac. Somewhere along the line after that there were girls, visions, everything; somewhere along the line the pearl was handed to him, but like so many that stand at the center when the blue light pops, the pearl drops into the grate on a street where you can still smell the last exhale of the cigarette that the guy put out as he got into the taxi.

The taxi that drove down the wet street, where most of the streetlights were still working, but that one keeps flickering, and no more taxis come and you knew none would. So you walk, and walk, until you get to that corner where there’s the place down a few stairs, and you wonder if you’d rather get out of the wet and the rain and have a drink, but then you would have to be with all the other people that wanted to get out of the rain or have a drink or just be with each other.

But, maybe it would just be better to smoke a joint there, in the rain by yourself, whether any cabs came or not, because how you get there is better than wondering why, or is it the other way ’round? And as you exhale the smoke and walk past the door, you remember that the pearl dropped into the grate. And now all the grates look the same, so even if you could reach your hand down there to try and get it, you can’t ever remember which one it fell into. So you just keep walking. Let someone else have the pearl or nobody else or maybe there just wasn’t ever one at all.

This entry was posted on Sunday, March 20th, 2016 at 12:24 pm and is filed under misc. You can follow any responses to this entry through the RSS 2.0 feed. Both comments and pings are currently closed.