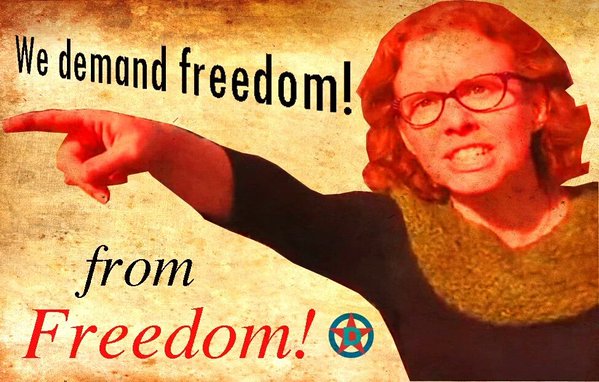 A Missouri professor has gotten more than her share of negative pixels this year. I actually decided after my last column on her that I was done writing about her.

Even when she claimed that her now-infamous plea for “some muscle over here” was not the real her. I resisted.

And after she hired a public relations team to give her a makeover, she now claims that the real reason she got fired is because she was the scapegoat for a racist patriarchy or something. (source)

Ok, fuck it, I’ll write about this idiot again.

From her recent statement:

In their decision to terminate my employment, the Curators bowed to conservative voices that seek to tarnish my stellar 12-year record at MU. Instead of disciplining me for conduct that does not “meet expectations for a University faculty member,” the Curators are punishing me for standing with students who have drawn attention to the issue of overt racism at the University of Missouri. While I have apologized on numerous occasions to numerous parties for my actions on October 10, 2015 and November 9, 2015, I will not apologize for my support of Black students who experience racism at the University of Missouri.

Yes, she expects you to believe that she got fired from a University for being too liberal.

The fact is, her actions on that one day are a great summary of her 12 year career, which is not “stellar.” It is utterly useless.

But, perhaps she is right. Perhaps terminating her isn’t fair. After all, she is merely a symptom of a problem, not a problem herself. The real disease is one that has infected higher education for at least a generation — political correctness, where identity politics and victim studies trump intelligence and qualifications. When that happens, again and again, what do you expect? How can you not wind up with “professors” like her?

The bats have come home to rest in the empty mental belfry of academia. In the short term, for the professor — as she was charged with assault for her misdeeds – something I disagreed with. Why? Because she was criminally charged for a mere legal trifle, even if it was an academic sin of the highest order. Firing her was the right thing to do, but what we need to realize is that she should not have been hired in the first place.

LET ME GET SOME VICTIM STUDIES MUSCLE OVER HERE!

Her CV indicates someone with a very shallow view of the marketplace of ideas, and someone who figured out how to game the system, but not someone who has much to offer when it comes to expanding knowledge, or just teaching students how to do anything useful.

Don’t get me wrong, hers was a brilliant path for anyone who wants to get hired in social science academia. Prove your “victim studies” cred and your CV goes to the top of the pile. And therein lies the problem.

Critiques of her CV fill pages of search engine results, but this one sums it up nicely.

So who is Melissa Click? She is an Assistant Professor at Missouri and has a PhD in communication from the University of Massachusetts. What was the subject of her dissertation? “It’s ‘a good thing’: The commodification of femininity, affluence and whiteness in the Martha Stewart phenomenon.” Obviously a work of serious scholarship. Prof. Click has a “Graduate Certificate in Advanced Feminist Studies,” too. So she is well qualified to teach your children. Something. (source)

Her “scholarship” includes Making monsters: Lady Gaga, fan identification, and social media, The romanticization of abstinence: Fan response to sexual restraint in the Twilight series and “Let’s Hug It Out, Bitch”: Audience response to hegemonic masculinity in Entourage.

She’s not quite finished with The trouble with Thomas: A closer look at the popular children’s Series. I presume that Thomas the Train is an agent of the Patriarchy, and railroads are a metaphor for rape culture, or something like that.*

What do you expect? She went to UMass/Amherst. I did too. Don’t get me wrong, I adore the place, donate to it, and will sing its praises until my vocal cords bleed. But, to say that it is a bit of a left-wing outlier is like saying that Donald Trump can be slightly abrasive at times. Just like I know when a dear friend also has a tendency to be an asshole, I am not blind to UMass’ flaws. One of them is that it often chooses political correctness over the promotion of knowledge.

While I graduated with a UMass journalism degree (which was one of the best moves ever), I spent a few semesters in a specialized major called “Social Thought and Political Economy,” (STPEC) which exists only at UMass. While there, I learned just how silly this brand of left-wing thought can be. I wish I had realized, at the time, that I was seeing the early stages of terminal academic stupidity.

To me, majoring in STPEC sounded great. In some ways it was. I fancied myself a little revolutionary. I wore Che Guevara t-shirts. I smoked weed and dropped acid and went on marches and building takeovers. It might have been 1987, but the way I saw it, it was the sixties, even though it was the eighties. And, I was the first brilliant 17 year old to discover Noam Chomsky and Howard Zinn. That’s a lot of college students, but this was particularly fashionable at UMass. And boy did I think I was cool.

UMass considered this to be “anti-semitic”

Part of that juvenile thinking-I-am-cool was that I loved The Dead Kennedys (still do, but I admit that I play it at a much lower volume now). I put up a poster from them, depicted here — “Nazi Punks Fuck Off.” I quickly found myself up on “civility” charges. Not because the content of my door decoration had profanity in it, that was just fine. No, it was considered to be “Anti-Semitic.” When I mockingly explained the significance of the poster, the residence director explained to me that the intent of the message was irrelevant — it was how it made the anonymous complaining party feel. If they felt harassed by it, I was responsible for those emotions. I was let off with a “warning.”

I took it down, since the last thing I wanted to do was make someone feel like I didn’t like them because they were Jewish — even if they were an abject fucking idiot.

But that was when I realized that there was a real problem at my University. The way I saw it, I should have had every right to put up a “Hitler Rules, Fuck Yeah!” poster, if I wanted to. But, if I could not put up the opposite of that, without having committed thoughtcrime then how could we have any debate? Was the subject just off limits? More troublingly, I could express one opinion, but be held responsible for the precise opposite opinion because some fucking idiot didn’t get the message?

Later, I took a writing class — “Writing for Critical Consciousness.” It sounded like a great idea at the time, even if I would mock the shit out of my 19 year old self for taking it. We had a paper due, and we were allowed to work in teams. Fortunately, I had a cool partner in this project, and as we were trying to write this piece of shit, I took a toke off a bong and suggested that we just do a “word salad” of politically correct terms. We laughed our asses off as we tossed in words like “heteronormative” and “hegemonist.” For about an hour, we both just typed nonsense. Complete and utter bullshit. When we were finished, we cut and pasted it into a single document, and handed it in. We just didn’t give a shit.

Imagine how hard we laughed when we got an A on the paper.

This is the UMass that produced Ms. Click. That is the left-wing academia that offends even me… and I think I’m pretty far left. I believe in a 99% income tax bracket at some level. I’m all for socialized medicine. I support affirmative action (but only for descendants of slaves). I’m in favor of a huge estate tax. Hell, its a good thing I’m not in charge, because I’d probably declare martial law and drag the 400 richest Americans, parade them through the streets Chinese Cultural Revolution style, and then publicly execute them, seize everything they have, and redistribute it to the poor. Fine, I’m a lunatic. Don’t let me be dictator, and everything will be fine.

But just as I learned at UMass, “political correctness” can become a parody of itself. Sometimes, like when you just word-vomit the right vocabulary, you get an A in “writing for victim studies.” Other times, though, it can be scary — like when you’re 18 years old and facing a panel of stern looking people telling you that your record may have something in it that brands you an anti-semitic racist, when your intent was 180 degrees the other way.

But, if you want a job in academia, that is the path. Find a way that you’re a victim, wear it like VIP pass. Write about utter garbage, as long as it promotes the feminist-critical-race-theory-agenda. One by one, the “old white men” left academia, and it started getting infiltrated by these fucking morons. When they reached a critical mass, even those who completely disagree know that they need to stay quiet.

A few brave voices spoke up. For example, Professor Kenneth Lasson, penned two academic warnings – Political Correctness Askew: Excesses in the Pursuit of Minds and Manners, and Feminism Awry: Excesses in the Pursuit of Rights and Trifles. He warned that campuses were becoming places of political and social orthodoxy, and that in the end, we would all suffer. How right he was.

But, unfortunately, no one was ready to listen then. And now, it might be too late. After Click’s incident, more than a hundred of her colleagues decided that her non-apology, where she blamed everyone but herself was “good enough.”.

So now we have Melissa Click, the new and improved one, claiming essentially that she got fired because she’s black… or because she “stood with” black students. I don’t think anyone takes her story seriously. Well, let me correct that, her fellow victim-studies idiots will. And, unfortunately, they’re now running the asylum.

But, if academia actually meant anything, she would never have been hired in the first place. She should be sent back to weep over heteronormative cis-gendered oppression in Teletubbies, and leave teaching to adults. Are there any available? Can they get past the search committee?

I hope the fuck so.

*Of course, my own law review articles have, on average, something like 10 downloads, so who the fuck am I to judge? MR. JUDGY PANTS, THAT’S WHO!

This entry was posted on Wednesday, March 9th, 2016 at 12:18 pm and is filed under misc. You can follow any responses to this entry through the RSS 2.0 feed. Both comments and pings are currently closed.