Is the First Amendment safe from Donald Trump? 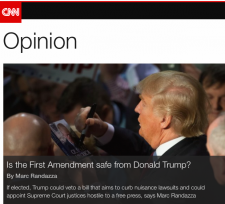 I write this as someone who was willing to vote for Trump. This gives me great pause….

Donald Trump has said a lot of strange things — some funny, some creepy, but none scarier than what he said on Friday: that if he is elected president, he will “open up our libel laws” to make it easier to sue the media and “win lots of money.” No matter what you may think about his other policy ideas, if he keeps this promise, we won’t be able to effectively express dissent against anything else he might want to do. We can fight any bad policy if we have a robust First Amendment.

Read the rest on CNN.

This entry was posted on Monday, February 29th, 2016 at 6:09 pm and is filed under misc. You can follow any responses to this entry through the RSS 2.0 feed. Both comments and pings are currently closed.