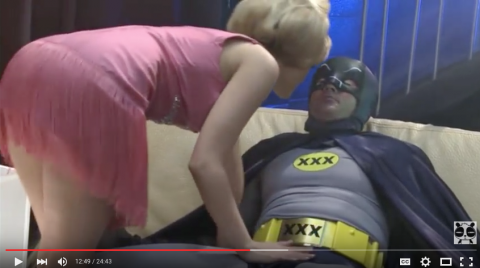 Holy rusty trombone Batman! They took out all the sex scenes!

In Clean Flicks of Colorado v. Soderbergh, Clean Flicks took commercial films and edited out the “sex, nudity, profanity, and gory violence” in original Hollywood movies, and created new tapes of the edited versions. The newly edited versions were then sold or rented to their customers. The movie studios claimed that these “clean” versions were copyright infringement.

Section 107 of the Copyright Act provides “fair use” of a copyrighted work, such as reproducing the work for the purpose of criticism, comment, news reporting, teaching, scholarship, or research is not copyright infringement.

Notwithstanding the provisions of sections 106 and 106A, the fair use of a copyrighted work, including such use by reproduction in copies or phonorecords or by any other means specified by that section, for purposes such as criticism, comment, news reporting, teaching (including multiple copies for classroom use), scholarship, or research, is not an infringement of copyright. In determining whether the use made of a work in any particular case is a fair use the factors to be considered shall include—

With regard to the first factor, Clean Flicks argued it was merely criticizing the objectionable content commonly found in current movies by providing more socially acceptable alternatives. The Court deemed this argument was “inconsequential to copyright law” and held it was not the Court’s job to “determine the social value of copyrighted works.” The Court then considered whether Clean Flicks’ use could be considered “transformative,” meaning whether the use “adds something new, with a further purpose or different character, altering the first with new expression, meaning, or message.” The work was not transformative because Clean Flicks added nothing new to the movies and merely deleted scenes and dialogue from them. The use was also for commercial gain, and the Court consequently concluded the first and second factors weighed in favor of the studios.

Looking at the quantitative and qualitative amount of the copyrighted material used, also favored the studios in the Clean Flicks case because the copies were almost identical to the originals, and used the entire original – except the naughty bits.

With regard to the most important factor in the fair use analysis, the effect on the market for the original, Clean Flicks trotted out the common infringer mantra, “but we’re helping you!” Clean Flicks argued that their infringement actually benefited the studios because Clean Flicks purchased a copy of the original work for each edited copy made, and consumers who otherwise would not have purchased the original films were purchasing the edited versions.

The Court stated, “The argument . . . ignores the intrinsic value of the right to control the content of the copyrighted work in the essence of the law of copyright. Whether these films should be edited in a manner that would make them acceptable to more of the public . . . is a question of what audience the copyright owner wants to reach.” Ultimately, the Court held that public distribution of edited versions of the studios’ films for the purpose of eliminating objectionable content did not constitute fair use.

But, Youtube doesn’t allow bang scenes… so, here’s the non-fappable version… at least until someone DMCAs it.

This entry was posted on Thursday, February 4th, 2016 at 5:55 pm and is filed under misc. You can follow any responses to this entry through the RSS 2.0 feed. Both comments and pings are currently closed.