Sono Stato a Roma Ma Non Ho Visto Un Cazzo! (I was in Rome and I didn’t see dick!) 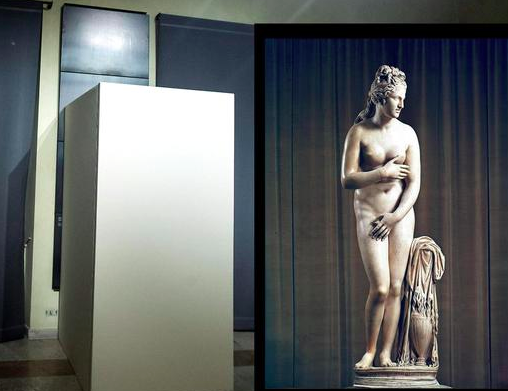 Iranian president, Hassan Rouhani, visited Rome recently, and in order to avoid offending his delicate sensibilities, the Italians covered up all the dicks and tits on the statues for him. (fonte) (source)

It probably comes as no surprise to any readers that this bothers me. 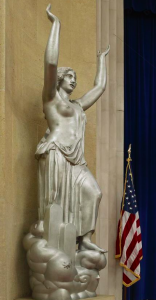 Remember when John Ashcroft couldn’t handle this? How about Obama?

It isn’t that I’m against thawing Iran’s relationship with the West. And, maybe that requires us to be a little sensitive — you know, like maybe don’t serve Carbonara at dinner, or don’t offer the guy a caffè corretto. But, to censor some of Italy’s most magnificent art, because this guy might be offended?

But, for all I know, he might have thought “what do these fucks think, I can’t handle the sight of a plaster dick? We stone motherfuckers to death were I come from, Mario. I can handle public executions. I can handle public whippings. What you call “gang rape,” we call “gently making love.” Motherfucker, I made it through the Shah and the Ayatollah. I can handle some stone tits.”

I dunno, or maybe he thought “aww, for FUCKS SAKE… I came all this way, hoping to fill my mental spank bank. I gotta go every fucking day where I’m lucky if I get to see a woman’s HAIR. I’m all excited to see some tits, even if they’re made of stone, and these assholes cover the shit up… and not even with a burkha, with a FUCKING BOX! Jesus, I hate these fucking people.”

But, lets presume that he actually appreciated that the Italians decided to protect him from granite ball sacks. You never know, it might have burned his eyes. Although, if the Pope can handle this shit, at least in modern times, then I think that Mr. Rouhani can tolerate walking past a few less-than-clothed statues.

I get a case of the red ass from this from two different perspectives. On one hand, fuck Rouhani. When in Rome, you look at stone nudity. The West (except for the United States) grew out of this bullshit more than a century ago. Yes, a few hundred years ago, some blue-balled fuckhead tight asses at the Vatican either smashed off the dicks of a bunch of the statues or covered them with leaves. But, after that Taliban-esque episode, Western culture sort-of grew up a bit. At the very least, we no longer destroy our patrimony because it might make us clutch our pearls or offend an imaginary friend.

Covering the statutes, whether out of respect or by request, sends the wrong damn message.

I’m not just sticking my finger in the Italians’ eye here. Who can forget the episode when George W. Bush’s attorney general John Ashcroft lost his shit that Lady Justice had a pair of nice tits? Probably a lot less people forgot that than those who forgot that the Obama administration did the same thing. Yep, the most powerful nation in history is scared of sculpted boobs. So, we are no better.

Meanwhile, in Europe, you see tits on prime time TV, you see them everywhere. Tits. Tits. Tits. It is the Garden of Happy Boobies, everywhere, everyday. Why in the hell should that change because some guy in a dress shows up, much less a guy in a dress who represents a nation that has a somewhat spotty record on human rights? Stone women to death, just don’t make me see her tits! That might offend the prophet!

The message this sends, no matter where it is done, is precisely wrong. I think it is fucked up when Americans do it, covering up tits, whether they be on lady justice or on Joanna Angel, in the name of modesty. But, in Europe, to avoid offending a conservative Muslim leader?

We live in a world where extremists destroyed priceless cultural relics in the name of their particular brand of Islam. The Bamiyan Buddha Statues stood for 1700 years, until the Taliban blew them up in the name of Islam. Islamic extremists burned Tripoli’s Al-Saeh library to retaliate for a mere pamphlet. Daesh destroyed the Temple of Baalshamin in Palmyra. In fact, Daesh is on a rampage to destroy all cultural heritage that doesn’t meet with its approval.

It is not fair to say that Islam itself is at war with cultural patrimony. Muslim heroes died trying to save artifacts in Palmyra. And, if you go back far enough in history, it was the Muslims saving cultural heritage from the Christians when they lost their minds about this kind of thing. Nevertheless, there is a brand of Islamic extremism, which has begun to infiltrate Europe, which would be delighted to see the Vatican museums, the Louvre, and the Uffizi Gallery reduced to rubble.

This cowardly cover-up gives aid and comfort to the enemy.

I admit, covering a few statues, temporarily, is hardly the same as destroying priceless artifacts. But it is a symptom of the same disease — “erotophobia.” And if we yield to it, even in this small way, we let the camel’s nose in the tent. (This is partially the point in my latest law review article)

Personally, I’d love to wag a dick in this guy’s face for the sole purpose of insulting Iran’s fucked up sensibilities. Although, I do think we ought to be better friends with the Iranians, in general. But, that’s a rant for another day.

But, lets set aside the Randazza school of diplomatic protocol, where we just keep a bucket of dicks around to throw at these kinds of people. Lets just look at it somewhat sensibly. Would this really have offended him? If so, take him somewhere else. Take him to the Colosseum and tell him about how many people were publicly killed there. He’s the president of Iran, that would probably give him an erection more than a pair of stone tits.

Will this really be the end of it? Perhaps. Or, could it go further? At what point will we do this for other leaders? Guys who are rich enough that we want to keep in their good graces? (UPDATE: Yes, apparently so) Muslim day at the museum? What about other belief systems? What about when there is a group of feminists visiting? Do you think that a Smith College women’s studies class could walk through an art museum in a few years without some professor who looks like Benny Hill with tits squealing “can we get some muscle over here?????” to get the statues smashed to bits, lest they “trigger” some little snowflake?

No, we need to resist this kind of thing… and I mean everyone, everywhere, every fucking time.

If the Italians were really concerned about this, the best way to deal with it would be to, perhaps, give him a “trigger warning” like every other little precious delicate snowflake wants.

“Hassan, we’re now going to see some art. You might not be used to seeing tits, but this is some of the best stuff we have to offer. Welcome to our culture. If that concerns you, you’re more than welcome to wait in the car. Either that, or might I interest you in this cordial invitation to go fuck yourself?”

Or how about take him to the museum, but blindfold him? That would be appropriate.

If you can’t handle seeing art, then cover your own eyes. The rest of us will just keep on being free grown ups.

This entry was posted on Saturday, January 30th, 2016 at 7:54 pm and is filed under misc. You can follow any responses to this entry through the RSS 2.0 feed. Both comments and pings are currently closed.

2 Responses to Sono Stato a Roma Ma Non Ho Visto Un Cazzo! (I was in Rome and I didn’t see dick!)