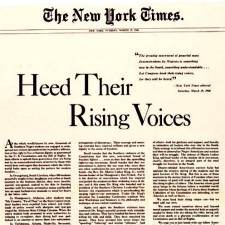 If I were to write about Martin Luther King, Jr.’s contribution to civil rights, I think I would be wasting my time. Far more qualified views are out there, especially today.

However, I feel like it is worth mentioning that he had a part in a profound change in favor of Civil Liberties as well. I speak of nothing less important than N.Y. Times Co. v. Sullivan, 376 U.S. 254 (1964).

That case is the foundation upon which stands most of our modern First Amendment jurisprudence, without which we would not have modern investigative journalism, the right to express our opinions, nor very likely much content on this blog.

That case concerned an advertisement that ran in the New York Times in 1960. The ad, titled “Heed Their Rising Voices,” stated: “As the whole world knows by now, thousands of Southern Negro students are engaged in wide-spread non-violent demonstrations in positive affirmation of the right to live in human dignity as guaranteed by the U.S. Constitution and the Bill of Rights.” The ad went on to state that “In their efforts to uphold these guarantees, they are being met by an unprecedented wave of terror by those who would deny and negate that document which the whole world looks upon as setting the pattern for modern freedom.” The ad illustratse the “wave of terror” by describing events that took place across the South, concluding with an appeal for donations in order to support the right to vote, the student movement, and Martin Luther King, Jr.’s legal defense fund.

There were indeed some slight inaccuracies in the ad. L.B. Sullivan, a Montgomery, Alabama City Commissioner sued the New York Times for libel, claiming that the advertisement targeted him. The Alabama state court held in his favor, and awarded him $500,000. This was unsurprising given the time, place, and jury makeup.

[W]e consider this case against the background of a profound national commitment to the principle that debate on public issues should be uninhibited, robust, and wide-open, and that it may well include vehement, caustic, and sometimes unpleasantly sharp attacks on government and public officials. The present advertisement, as an expression of grievance and protest on one of the major public issues of our time, would seem clearly to qualify for the constitutional protection. The question is whether it forfeits that protection by the falsity of some of its factual statements and by its alleged defamation of respondent. N.Y. Times Co., 376 U.S. 254, 271.

How beautiful that language is. The Court went on to reject any notion that the burden of proving truth is laid at the feet of the speaker. Id. And even though the advertisement had some minor errors, New York Times v. Sullivan held that if there is to be wide open and robust debate, the First Amendment needs “breathing space” in order to survive. And in order to impose liability for merely erroneous reports on political conduct reflects the “obsolete doctrine that the governed must not criticize their governors.” Id.

The ad was, according to the Court, “an expression of grievance and protest on one of the major public issues of our time.” N.Y. Times Co., 376 U.S. 254, 271. And since the decision, it has only gained more traction and more strength, being firmly entrenched to the point that one can not usually write a brief defending a defamation case without citing to Sullivan. Similarly, one should not bring a plaintiff’s side defamation case without seeking to avoid its shores upon which many a censorious asshat finds his ship dashed.

This leaves the American press wildly free — at least in theory.

But for Dr. King’s struggle, we would never have had New York Times v. Sullivan. It may not have been a case or event central to his legacy, but it is central to our profound national commitment to wide-open and robust debate.

In this day and age those who seek to promote Civil Rights often seem to be at odds with Civil Liberties. The First Amendment is seen as the enemy to the “Social Justice” crowd. Today, I try and remind them that there was a time when Civil Liberties and Civil Rights were symbiotically joined.

Lets remember that, on this day set aside to honor Dr. King.

This entry was posted on Tuesday, January 19th, 2016 at 7:52 pm and is filed under misc. You can follow any responses to this entry through the RSS 2.0 feed. Both comments and pings are currently closed.