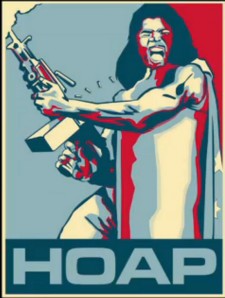 Beats the hell out of Hillary

Bernie Sanders sues the Democratic National Committee and the complaint is here. The legal issues are less exciting than Bernie’s hair style. What is more exciting is that Bernie Sanders isn’t taking this shit from the DNC. The DNC is playing the part of Roger Goodell in the 2016 election cycle. See Former NFL VP Of Officiating: “Looks Like The League Office Is Making Decisions On Who Wins/Loses Games” With New Playoff Officiating Rule, Masshole Sports.

My take on this is that the DNC was pissed off enough last time around when its anointed candidate didn’t beat the upstart. They weren’t going to let it happen again, and they’ll do whatever it takes to put her highness on that ballot.

In other words, I deflate my bowels in Roger Goodell’s face and the DNC’s face, simultaneously — and I pledge that I’ll never vote for HRC. I don’t care who the Republicans put up.

What would be awesome? Bernie and Trump run as independents, and the Democrat and Republican anointed princelings come in third and fourth. Lets face it, say what you want about Trump, but he represents the conscience of the Right, just like Bernie represents the True Left. The Parties are our enemies, no matter which side you’re on.

I wrote a really good post on the Lanham Act today with with no cuss words at all (here).

This entry was posted on Saturday, December 19th, 2015 at 4:56 pm and is filed under misc. You can follow any responses to this entry through the RSS 2.0 feed. Both comments and pings are currently closed.