“If you protest, you’re just inciting the police to shoot you, so what do you expect?”

How about, “if you don’t want people to protest, then don’t treat them in a way that they feel like they need to protest.”

If you don’t like people drawing Mohammed, perhaps you shouldn’t incite them to do so by reacting so negatively about it.

Drawing Mohammed is now not only permissible but (I think) absolutely goddamned necessary. It is necessary to defy those who would stifle debate with violence. 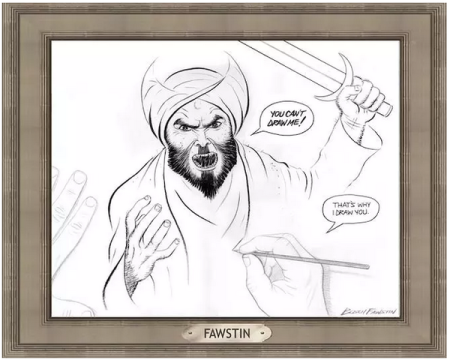 The winner of the “Draw Mohammed” contest.

Do I like offending Muslims? No. Not at all.

But, nobody ever got killed over it. Christians moved on.

If anyone ever killed someone over “Piss Christ”, I’d be peeing on crucifixes like it was an Olympic sport.

Draw Mohammed. Spread pictures of Mohammed. They’ve now made it an imperative.

This entry was posted on Tuesday, May 5th, 2015 at 8:57 am and is filed under ass hat, censorship, Civil Liberties, political correctness, politics. You can follow any responses to this entry through the RSS 2.0 feed. Both comments and pings are currently closed.