What are the Lyrics to Louie Louie? The FBI figured it out, finally….

We must marshall the forces of the US Government to fight this menace!

Would you believe that the FBI conducted a two year investigation into whether someone should go to jail for “Louie Louie.”? Yeah, the song. A threat to national security and order!

The FBI documents are here.

Can you imagine what kind of blueballed hall monitor dipshit fuckhead decided that there should be an FBI investigation at all much less one that lasted for two years?

They’re the kind of people who now find themselves as administrators at colleges and law schools. They’re the kind of people who have decided that “that kind of thing” bothers them — even if the “thing” has changed (but not really by a lot). Although this letter was most certainly not written by Catharine MacKinnon, you can find her spirit in between the lines. (Will over-privileged bored white women always be the bane of liberty?) See also Catharine A. MacKinnon, Pornography, Civil Rights, and Speech, 20 Harv. C.R.-C.L. L. Rev. 1, 3 & n.2 (1985).

A threat to national security

It should come as little surprise that the ball started rolling with the Indianapolis and Tampa FBI offices. Yep. The more things change, the more they stay the same. Two bastions of stupidity in 1964, and 50 years later, not much has changed. See, e.g., American Booksellers v. Hudnut, 771 F.2d 323 (7th Cir. 1985). In all fairness, Detroit really picked up the ball and ran with it too. So, lets hear it for a tradition of wasting time and money.

The punch line? Do you know the lyrics to “Louie Louie?”

No, without using Wikipedia.

How many times have you drunkenly swayed back and forth screaming absolute nonsense, knowing full well that the only words you know to it are “Louie Lou-waaay,” “yeah, yeah, yeah, yeah, yeah” and “we gotta go?” Hell, I’ve even performed the song on stage, no fucking idea what the lyrics are. (Spolier alert, it isn’t “we gotta go”)

Because after two years of investigation, including analysis of the song by the same FBI laboratories that would decode Soviet spy transmissions, I’ve figured out that not knowing the words to Louie Louie doesn’t make me all that stupid.

Here’s what our government came up with:

Even FBI experts can not figure out the words to Louie Louie!

With all the power of the FBI’s labs, nobody could figure out what the lyrics were! (Letter) It seems that at least four field offices, plus the Washington headquarters, and at least two separate analysis labs listened to the record again and again, and they couldn’t figure it out.

Yep, we broke enemy codes in World War II, but the collective might of American superpower intelligence could not figure out the words to Louie Louie. The same guys who were supposedly keeping us safe from the Soviet menace were sitting there with 45 RPM records and could not discern the meaning of the song. I shudder to think what might have happened if the Soviets really decided to screw with us back then.

Finally, some genius decided (after more than a year of investigation and lab analysis) to just ask the record company what the lyrics were.

That helped us determine that maybe the FBI was wasting its time. (report here) Of course, that did not end things, because another office still referred it to the lab for analysis. (memorandum)

And, they still didn’t have the lyrics right.

Finally, some real genius thought of the idea of taking a stroll down to the copyright office — you know, the one down the street from the FBI.

You see, the song was registered, and the lyric sheet was right there sitting in a public record. So once they figured that out , our tax dollars finally gave us this definitive determination of the lyrics to Louie Louie. (investigation sheet) Yep, years of research, lab techs slowing down the record, all the powers of the federal government, and finally someone thought to walk over to the copyright office and take a look.

Oh, and what ARE the lyrics? 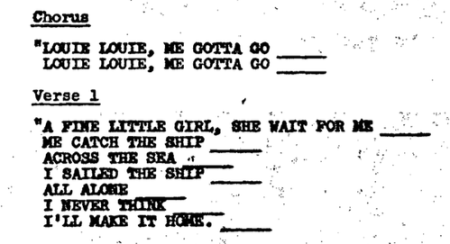 There you go, courtesy of the Federal Bureau of Investigation — the lyrics to Louie Louie, finally! Now next time you sing it, you’ll know.

If you think that this is more about Louie Louie than you ever wanted to know, Eric Predoehl, is actually doing a complete documentary on the song. (source) An interview with him on NPR was the inspiration for this post.

This entry was posted on Saturday, May 2nd, 2015 at 11:06 am and is filed under misc. You can follow any responses to this entry through the RSS 2.0 feed. Both comments and pings are currently closed.

10 Responses to What are the Lyrics to Louie Louie? The FBI figured it out, finally….