Racist Bastards! (Or are they?) 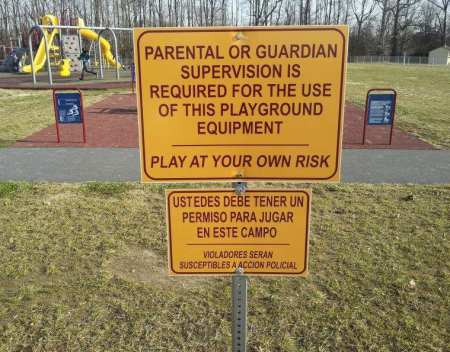 Take a look at the signs above – found at a Delaware elementary school.

If you’re reading this, chances are, your eye is drawn to the one in English. Nothing strange there, right?

My Spanish isn’t great, but if you look at the other sign, it essentially says “You need a permit to play in this field, or you will be subject to police action.”

A while back, we might have seen signs that say “Whites Only,” but here we have some sneaky and sniveling racism.

This photo has been making the rounds, as an example of a community’s anti-immigrant bigotry.

“It seems we are not yet past the national embarrassment of ‘Whites Only’ signs marring the civil landscape in America,” blogger Frank Balsinger wrote on the website Scholarsandrouges.com. “If this isn’t a clear cut civil rights violation, I don’t know what is.” (source)

Someone once told me to never blame something on evil that can be explained by stupidity.

Lets put Mr. Evil and Mr. Stupid up against the wall, and lets interrogate them to see who is more likely to be responsible.

The Superintendent of the school explained:

“Signs with the same message in English and Spanish are posted at the sports fields at the high school complex and the middle school, because you do have to have permission to use those fields,” she said. “The playgrounds at Mispillion and Ross are both relatively new and I think someone put the Spanish signs meant for the athletic fields at those locations by mistake.”

Kohel said the confusion doesn’t appear to have been limited to Spanish language signs, either.
“We found one today at Banneker Elementary School in English that said the same thing, even though those rules don’t apply to any of our playgrounds,” she said. “We expect people to use our playgrounds anytime, without any special permission. That’s what they’re there for.” (source)

Maybe I just want to believe that nobody could be such a huge asshole that they would put up signs to try and dissuade children from playing on the slide at an elementary school. But, lets really think about this. If Mr. Evil is really responsible, did he actually think that there wouldn’t be a single bilingual person who would notice the discrepancy? Meanwhile, do you think that perhaps Mr. Stupid was a municipal employee who wasn’t exactly fluent in Spanish, and who didn’t do his job with a lot of attention to detail?

This entry was posted on Monday, January 7th, 2013 at 2:21 am and is filed under ass hat. You can follow any responses to this entry through the RSS 2.0 feed. Both comments and pings are currently closed.

7 Responses to Racist Bastards! (Or are they?)