Christians should be slaves. Textbook fails to support that view. Panties are wadded.

When I hear American Christians speak, this is the magic space zombie jew that I see in my head.

Dennis and Aimee Taylor got their panties all in a wad because their son had to read the book “Nickel and Dimed: On (Not) Getting By in America,” in his personal finance class at Bedford High School.” (New Hampshire)

In the book, the author (Barbara Ehrenreich) recounts experiences she had while trying to make a living at minimum wage jobs all across America. She criticizes the current conditions in America, arguing that our economic system is unfair toward the poor.

So who is that most likely to piss off? You guessed it… “christians”.

Aimee Taylor is quoted as saying, “The author is a known social Marxist, hates everything American, everything that America stands for or was built on. I mean when you read the book you see that strongly in this woman’s agenda. It’s horrible.” (source).

The irony is pretty thick here — since Ms. Taylor and her husband are calling for mass firings in the Bedford school district – because they don’t like the book that the district assigned to her son. You know, its Un-American to write a book saying that maybe even the down-trodden proles who share citizenship with us should, oh I dunno, live a decent life?

Of course, no whining christian hissy fit is complete without taking a quote about their imaginary friend out of context:

The Taylors also took issue with the book’s portrayal of Christians. In one scene, Ehrenreich attends a tent revival meeting, and is troubled by its emphasis on Jesus Christ’s crucifixion, rather than his social teachings.
“Jesus makes his appearance here only as a corpse; the living man, the wine-guzzling vagrant and precocious socialist, is never once mentioned, nor anything he ever had to say,” Ehrenreich writes.(source)

I haven’t read the book, but this blogger has. Here’s how he explains the “wine-guzzling vagrant” passage.

The “wine-guzzling vagrant and precocious socialist” line appears on page 68 as part of the author’s account of attending a tent revival near a residential elderly care facility at which she worked, and laments the fact the speakers dwell on the hellfire-and-brimstone, doom-and-gloom elements on the Bible and Christ’s crucifixion rather than his more positive messages. Her reference, while perhaps overly flippant, is not intended as a hateful denigration of Jesus. But I digress.) (source)

Fortunately, the school district had a measured response to these cult-members.

In response to the Taylors’ complaint, school district officials convened a materials review committee of teachers, administrators and community members to assess the book. Upon review, the committee ruled that the book’s educational merit outweighed its shortcomings.
“We found the book provided valuable insight into the circumstances of the working poor and an opportunity for students to demonstrate mastery of the ‘Financial Impact’ competency,” the committee reported.

Of course, Dennis and Aimee Taylor sure showed that there school district – they took their son out of school and decided to home school him. I’m sure that his future will be bright, as two fucking morons who believe in fairy tales will now be teaching him chemistry.

To put a cap on his stupidity, Dennis Taylor leaves us with this quote:

“Nobody gets out of the hole in this book,” Taylor said. “Really, is that the message we want to teach children in Bedford, who of all Americans ought to be capitalists, and produce the wealth that other people enjoy?”`(source)

And that, dear readers, is exactly what modern American christianity is all about — that those who live their lives following this false fairy tale should do so to ease the pain of their slavery. Being a “capitalist” means “producing the wealth that other people enjoy.”

Fortunately for Dennis Taylor, his son will very likely fulfill that role — as he dons his smock for a day greeting the People of Wal-Mart. He can produce the wealth that other people enjoy. 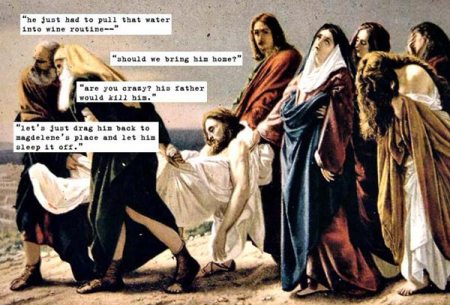 This entry was posted on Tuesday, December 7th, 2010 at 3:11 pm and is filed under ass hat, censorship, church and state, culture, flunkies, imbeciles. You can follow any responses to this entry through the RSS 2.0 feed. Both comments and pings are currently closed.

9 Responses to Christians should be slaves. Textbook fails to support that view. Panties are wadded.