Jesus is a dick, Bills fans and poor people already know this

The media is all aflutter over Buffalo Bills receiver, Steve Johnson, who dropped a game-winning pass, and then used Twitter to blame the Magic Space Zombie Jew. 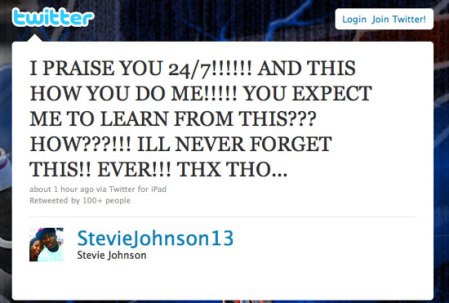 Mr. Johnson, I agree. The thing is, Jesus is a dick. The ungrateful fuck just flies around in space, demanding that we bow down and kiss his ass, and meanwhile, what does he do for everyone who worships him? Well, let’s take a look at the most religious places on Earth…. Haiti? The Philippines? Mississippi? It is as if a massive divine shit bomb landed on all of those places. Meanwhile, the strongholds of atheism like Norway, Vermont, and Canada? Yeah, that’s what I thought… the thing is, when Jesus hears you acting like a servile little pussy, begging him for shit, he loses respect for you. Who wouldn’t? Think of the homeless assholes you pass on the way to work. “Please sir, can’t you help me?” Sure, you might have some compassion for them, but that’s the best you’ll ever drum up for them. And YOU are a good person.

Jesus, on the other hand, is a dick. (source)

Worse yet, he’s one dick who loves to watch football — and can’t keep his dirty nazarene hands off of the damn results.

I’m no Bills fan, but I’m not a Bills hater either. Therefore, I’m just speaking the truth here – Jesus hates the Buffalo Bills. Just ask Scott Norwood. He kicked that ball straight and true. Of course, Jesus was busy making a little boy die from cancer that day. After he destroyed the faith of the kid’s entire family, he slammed back his 10th Mickey’s Big Mouth, let out a belch, and said “oh fuck! The Superbowl is on!” So Jesus smashed the bottle, and zapped right over to Tampa, dropping a few cases of AIDS and some crack on most of the city on the way there, and then gave a high holy silent-but-deadly fart into Tampa Stadium. It was just enough divine ass wind to push the ball wide right, and lo, Jesus and his dad had a big laugh. Dicks.

Of course, nobody came out and blamed Jesus. That’s when that divine twat decided that he would keep fucking with sporting events. What with his dad all busy taking a huge dump on the entire continent of Africa, Jesus knew that the Big G wouldn’t really care. Did Saddam Hussein really give a shit when his kids messed with the Iraqi soccer leagues? So for the next three years, Jesus more brazenly kept punishing the Buffalo Bills.

The thing is, the Bills had done nothing to warrant this. Mr. Johnson doesn’t get it. Jesus does hate him, but that’s because he is on the Buffalo Bills, AND because he is always whining in the Man from Galilee’s ear. Think about it. You must know someone who is sort of a loser, who always calls you, and you ignore the call. But, eventually you listen to the voicemail, and its always that loser asking for something.

So look, Johnson (and anyone else), if you want to stay off Jesus’ shit list, there are two ways to do it: 1) Don’t root for the Buffalo Bills until Jesus’ attention span wanes, and 2) Stop asking him for shit. When he eventually listens to your message, he just acts like a dick.

Can't he get into a different sport?

DISCLAIMER: Don’t misunderstand this post. I have nothing against the Bills. In fact, as long as a Bills win has no implications for the Patriots’ playoff picture, I root for them. So don’t anyone out there think I’m hating on the Bills. I’m not. I’m mocking clowns who follow a magic space zombie jew.

This entry was posted on Monday, November 29th, 2010 at 9:49 pm and is filed under sports. You can follow any responses to this entry through the RSS 2.0 feed. Both comments and pings are currently closed.

17 Responses to Jesus is a dick, Bills fans and poor people already know this