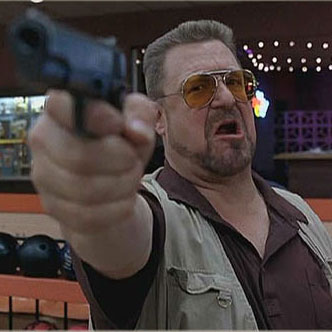 I've got news for you: the Supreme Court has roundly rejected prior restraint!
So Goldmansachs666.com will remain up as this case slowly winds its way through the courts like the man in the black pajamas wound his way through the jungles of 'Nam.

Michael Morgan is a Florida blogger who is a little bit upset with Goldman Sachs and its business practices. To voice his displeasure, he registered the domain name goldmansachs666.com and goldmansachs13.com and forwarded them to his blog on the financial giant.

Naturally, Goldman Sachs doesn’t like to be criticized. Who does? Nevertheless, I fail to see how they could have perceived Morgan as a threat to their financial well being or anything else. The fact is, Mr. Morgan’s blog just isn’t that good. The layout is visually painful. The writing isn’t engaging. After muddling through it for about 15 minutes, I still don’t really get what all the fuss is about. In other words, Morgan’s blog was destined for the blogger derelict heap. Morgan has a full time job, had very few readers, and probably would have either gotten bored with his griping, or his blog would have been ignored to death.

With Morgan’s blog plodding along in obscurity, enter John A. Squires of Chadbourne and Parke, LLP. Now this guy has an impressive background: He was top of his class in law school, on his law school’s moot court team, on law review, and an Order of the Coif inductee. Sounds like a pretty smart guy, no? Smart enough to become co-chair of the intellectual property practice at a major law firm. Smart enough that he “is widely recognized in both the financial services and technology sectors as one of the country’s top experts on the issue of patent-eligible technologies.”

Nevertheless, he put his name to one of the dumbest trademark demand letters I have ever read. Go ahead, click it. If you practice trademark law, don’t drink any liquids while reading or you’ll shoot them out your nose as you’re laughing and then you might have to change your shirt.

2) A lawyer who doesn’t understand public relations is only half a lawyer.

I’m just guessing here, but I’m reasonably certain that Mr. Squires did know better. This demand letter just screams “reluctantly written to shut a client up.” Patent lawyer or not, the guy had to know that his trademark claims were just plain stupid. If goldmansachs666.com creates confusion in the marketplace, then I guess that I had better stop calling my balls my “nutsack,” because someone might come along and expect them to sweat stock options.

Personally, I would never have affixed my signature to this piece of dung. I’ve learned the art of “client control.” That’s when you tell someone “my credibility is worth more than what you want to pay me to write this unsupportable demand letter.” Sadly, many lawyers never learn this skill. I’m certain that some tool at Goldman Sachs told Squires “I don’t care if we can’t back the claims up, just send the letter to try and scare this little mouse of a blogger.” (Or maybe I’m just inclined to give the lawyer the benefit of the doubt).

Although I would love to say that I would continue to that same big shiny set of brass balls if my client were a gazillion dollar financial powerhouse that shits rubies, I won’t judge Mr. Squires until I walk a mile in his Bruno Maglis — especially since I’m 98% certain that somewhere, he has an email to his client telling them that the claims in the letter are just one molecule away from being pure pharmaceutical-grade fecal goodness.

At least I hope so… because the mouse, he bite.

Squires’ letter ends with a threat that if Morgan doesn’t confirm, in writing, that he will stop using the words “Goldman” and “Sachs,” they just might sue him. Well, April 18 is a Saturday, Walter Sobchak doesn’t roll on Shabbos, and Mike Morgan did respond in writing — with a lawsuit of his own.

Morgan probably figured that if Goldman Sachs wasn’t bluffing, they would file suit against him in New York. Morgan lives in Florida, and would likely rather just have it out in Florida than travel to New York. So, given that there was a bona fide legal question — created by Squires’ dumb letter, Morgan had the right to file suit to just get the whole thing over with. Naturally, Goldman Sachs probably isn’t too worried about the financial consequences of this suit. The most that Morgan will win is a piece of paper that says he has the right to use the words “Goldman” and “Sachs” to criticize Goldman Sachs. But what a piece of paper it will be.

More importantly, now that he has filed suit, a lot more people are going to take note of this dispute. I’ve been following it for a little while myself, and until I received a copy of Morgan’s complaint, I didn’t really find it interesting enough to write about. Guy gripes. Company whines. Dumb demand letter. Yawn. Happens every day.

What doesn’t happen every day is that the griper has the coglioni to tell one of the biggest financial institutions in the world “You wanna step outside? Fine, lets go.”

So now what happens?

Hopefully, Mr. Squires tells his client “I told you so,” and keeps a copy of the memo he sent them telling them that this was all a really dumb idea and that they should have just ignored Mr. Morgan’s blog. If he didn’t tell them so, then someone at Goldman Sachs should re-think how they choose their attorneys.

Once that is all settled, Goldman Sachs should just gracefully back away from this — issue a statement that they reconsidered their position, and it all goes away. The first rule of getting out of a hole is to stop digging. However, I predict the opposite will happen: Goldman Sachs will dig in, the Spin Doctors song “Little Miss Can’t Be Wrong” will be played over the PA system at Chadbourne and Parke, and we will see both an answer and a counterclaim that will be just one hair shy of being frivolous enough to warrant sanctions because some nitwit will think that it will scare Morgan into submission… and the case will draw even more attention to this once-obscure blog.

And then we’ll see if Mr. Morgan’s reporting on Goldman Sachs’ misdeeds grows any legs. He already has a conference call scheduled to gather the volunteers who have rallied to his side.

This entry was posted on Tuesday, April 14th, 2009 at 7:44 am and is filed under ass hat, cybersquatting, First Amendment, internet law, law practice, trademark. You can follow any responses to this entry through the RSS 2.0 feed. Both comments and pings are currently closed.