Sarah Palin rocked my world. I have never have been so heavily involved in politics or so embarrassed to have a vagina. When I listen to Palin speak and perform, I think of Ms. Teen South Carolina. My brain screeches to a halt and my jaw drops. I want to stick a finger in my ear and wiggle out the wax – just in case I didn’t hear right. I can’t comprehend Palin’s rhetoric because she doesn’t know anything runs after her own tail, diverts to only what she knows (not what I want to hear) and then she catches me off guard with those “you betcha” winks.

I cringed when little Sarah confidently announced a Republican win was God’s “perfect will for this nation” and in his hands. Unsurprising of course, we haven’t heard a word of praise to God for his truly amazing vision that brought us a liberal black man. Instead of surrendering to the will of God and accepting his mysterious ways, Palin began to entertain name calling: “those guys [her critics] are jerks“. Her continued media bashing is unappreciative of her lucky fortune and her professionalism doesn’t sit a centimeter below her fancy wardrobe.

Palin is a world-class celebrity wannabe whose guest appearance at the local turkey slaughterhouse highlights her common status as a moose hunting feminist ditz, whose arrogance slaps those who believed in her fresh feminist appeal. Even Camille Paglia gave her a chance when stating Palin exuded “a combination of male and female qualities never seen before” as a mother with good looks, a sharp shooting moose hunter and an accomplished career woman all while balancing family; a real Frontier go-getter who possesses kiss my ass confidence. Shame her intelligence centers froze in Alaska.

Though Hillary Clinton may be a ball buster, far from pretty and low in likability, she has a real track record, exposed a sensitive side and genuine compassion for America’s future. Though feminism and politics armored Clinton with a tough exterior, she doesn’t need to charm her audience to gain popularity. Hillary Clinton may be a classic feminist bitch but considering the alternative, which do we really prefer: a ditz needing a geography lesson or bitch needing charm school? 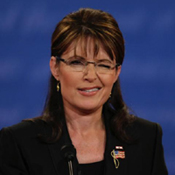 A world-class celebrity wannabe with *some* redeeming qualities. However, 'the winks can stay at the local bar.'

Personally, I’d like to see the new generation of young women create a synthesized version of Hillary Clinton’s experience, diplomacy, compassion and knowledge with Sarah Palin’s spunk, motherhood balance and beauty/sex appeal. The winks can stay at the local bar. Obviously the world was knocked over by the fem-charm Palin exhibited. It was as though she perfumed America into a hypnotic trance with her sexiness and as such, is it slightly possible that femininity itself needs a fresh perspective in a new era of feminism? Could Palin have had one thing right?

I found Palin’s confident sex appeal endearing simply because I disbelieve that a feminist can’t be sensually appealing, pretty or feminine and I challenge the old myth that femininity is a weakness. It’s possible to nurture both the womanly and intellectual qualities women have and find a balance between the two. It seems femininity alone made half the country dismiss the need of a brain. Imagine if Sarah had one.

Maybe it’s time to recreate the new feminist into a sensual, intelligent, sex-positive, open-minded and male acceptant woman. Femininity has incredible power if intellect and a decent level of diplomacy accompany it and it’s an aspect of a woman’s identity that’s been suppressed to prove women can do more than cook, clean and care for babies. If change is abound, let’s think about how to evolve feminism.

If smarter in international relations and political knowledge while toning down winking and “betcha” language, a female can be one hot momma and be president. Why the hell not? The September 2008 issue of Bazaar Magazine’s photo spread, the “American Dream”with Tyra Banks playing “first lady” is fabulous and a representation of true, hard core feminine elegance. The photos ooze class, style, sensuality and intelligence and if I were to visualize a synthesis of Hillary and Sarah, pigment aside, Bazaar’s photo spread shows us what a modern feminist might look like in the White House, First Lady or President.

“God’s will” wasn’t to change America Sarah’s way but to show us that feminine qualities are acceptable, endearing and nothing to be ashamed of. Perhaps we need it back in the feminist arena. However, in confidently revealing the too often hidden feminine identity, one might wish not to exchange intelligence and common sense for it. Hint, hint, little Sarah.

Then again, maybe “God’s will” was to embarrass the hell out of our Alaskan moose hunter for her uncompassionate, over-confident, judgmental, egotist, career hungry, do-it-my-way-or-no-way being. In that case, God did well. Aren’t we glad?

Tatiana von Tauber is an artist and photographer, writer and blogger whose life is centered on exploring and understanding the philosophy of love, sexuality and eroticism and its influences on society and consciousness, growth and existential freedom and all things feminine through various artistic and creative forms.

This entry was posted on Wednesday, November 26th, 2008 at 4:38 am and is filed under culture, politics. You can follow any responses to this entry through the RSS 2.0 feed. Both comments and pings are currently closed.